The Dandelion Shelter is an achievable first step towards making the greater surface of Mars accessible for human exploration. Mars is a hostile environment where travelling more than a few kilometres from your colony is a dangerous challenge - if anything goes wrong, there may not be time to return, especially during global dust storms. Very little light penetrates these thick layers of dust, but with glowing Dandelion Shelters lighting the way on the dusty and barren Martian surface, explorers are never too far from a place to breathe and rest. 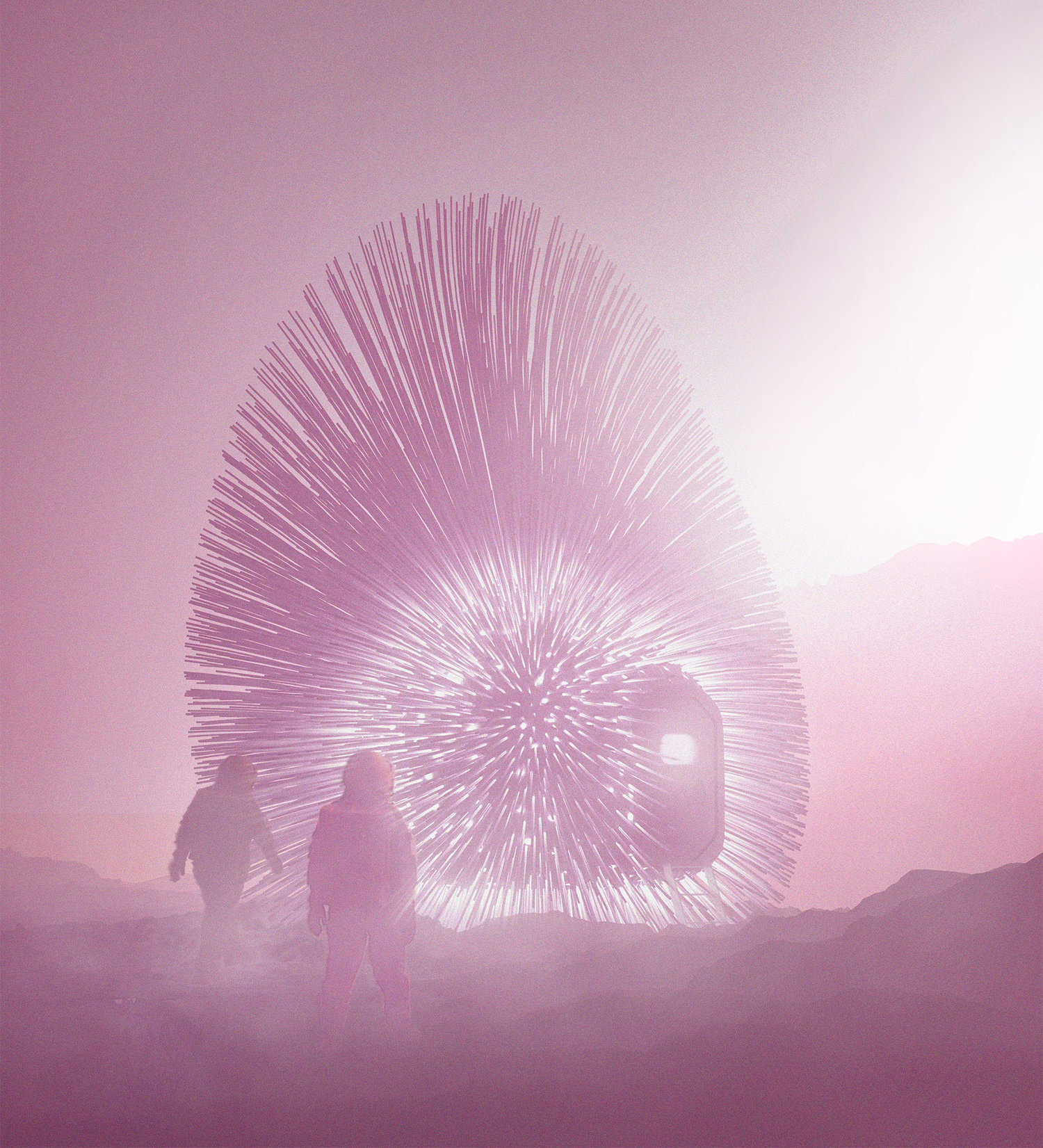 The shelters fly through deep space like dandelion seeds in the breeze. An efficient stacking principle ensures that twenty individual shelters fit into one Falcon Heavy payload, carrying seeds for life. Once they land, each unfolds like a blooming flower. 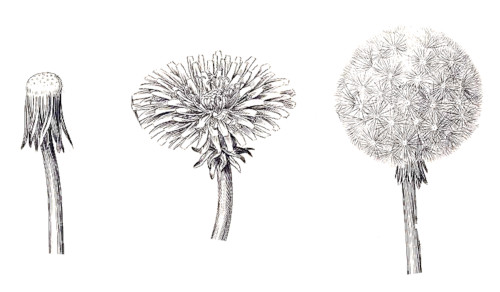 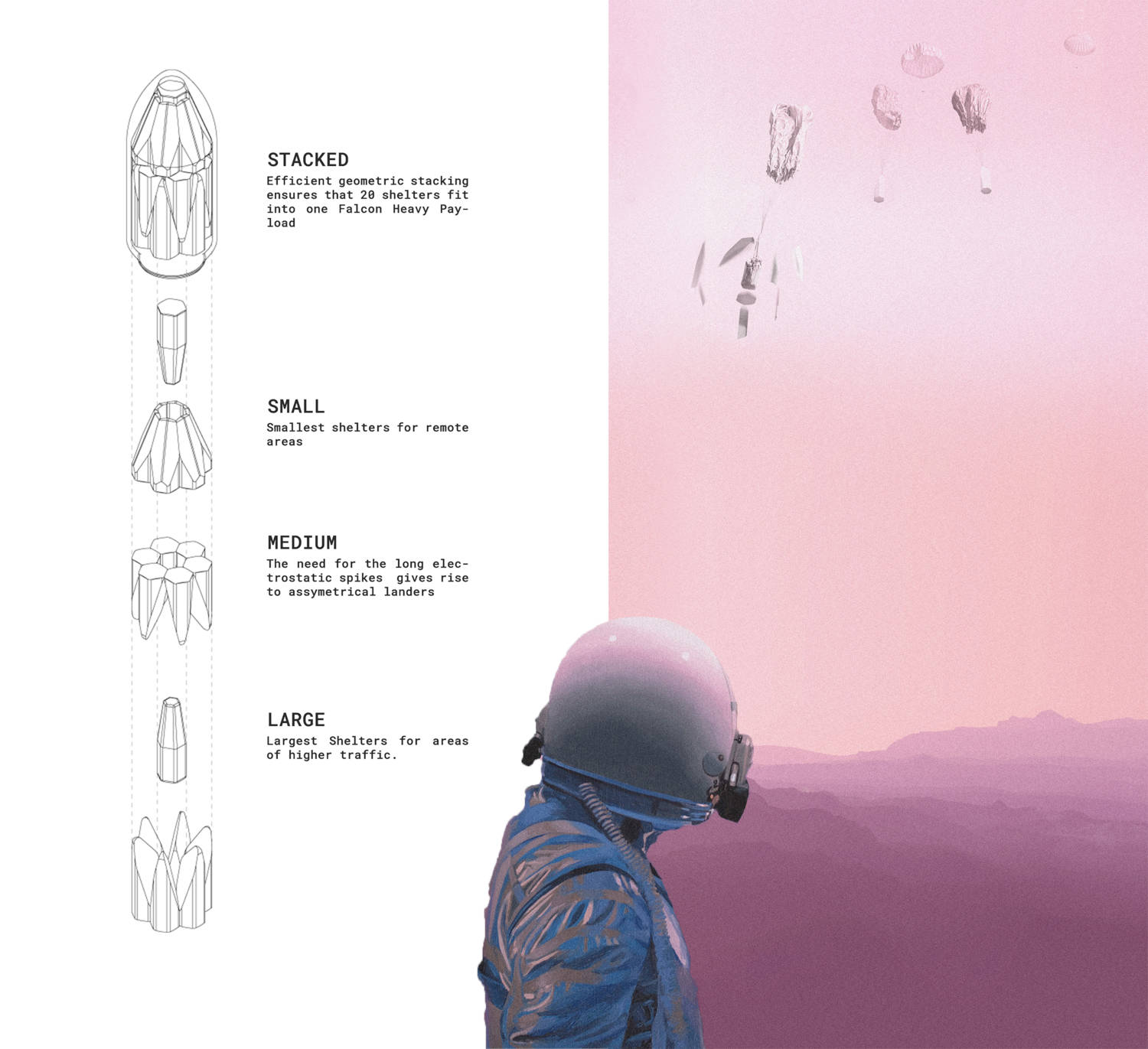 As soon as the shelter is planted, environmental integration begins. Dust storms rage by, charging the shelter with static electricity and filling up its radiation barrier with airborne dust and regolith. It begins to passively prepare for sustaining human life by electrolysing air into water, farming algae, producing oxygen and establishes radio communication with the surrounding network of shelters and colonies. When fully charged the Dandelion glows in the dark dusty landscape, ready to navigate, house and feed explorers, charge their rovers and be part of the greater network of life-sustaining Dandelions.

Imagine stepping out of your colony on Mars and instead of seeing a lifeless void, there lies a path of Dandelions lighting up in the horizon. Guiding you like a lighthouse through blinding fog. 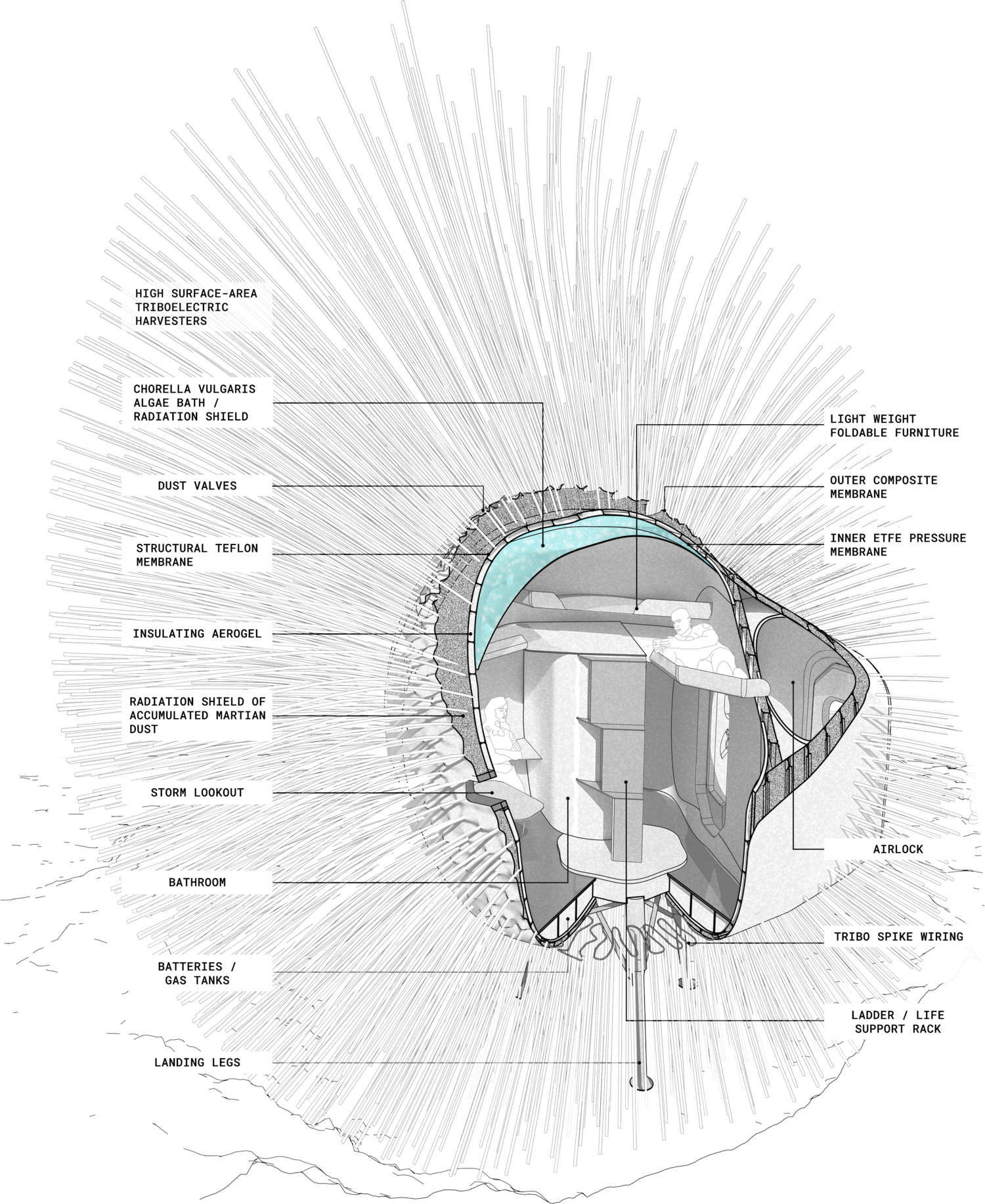 Instead of perceiving Mars cold, windy and dusty atmosphere as constraining, the Dandelion Shelter embraces the climate and utilises its unique qualities.

The fundamental design concept is its external surface that harvests static electricity from dust particles. Static electricity is caused by the triboelectric effect, which happens when two materials touch and electrons migrate from one surface to the other, depending on their relative capacitance. On earth this charge escapes into the humid atmosphere before it becomes a useful source of energy. Mars however, with its highly insulating regolith, low atmospheric pressure, cold temperatures and extremely dry conditions, has potential to build-up tremendous electrostatic charge. In these otherwise extreme conditions lie a hidden potential for energy. 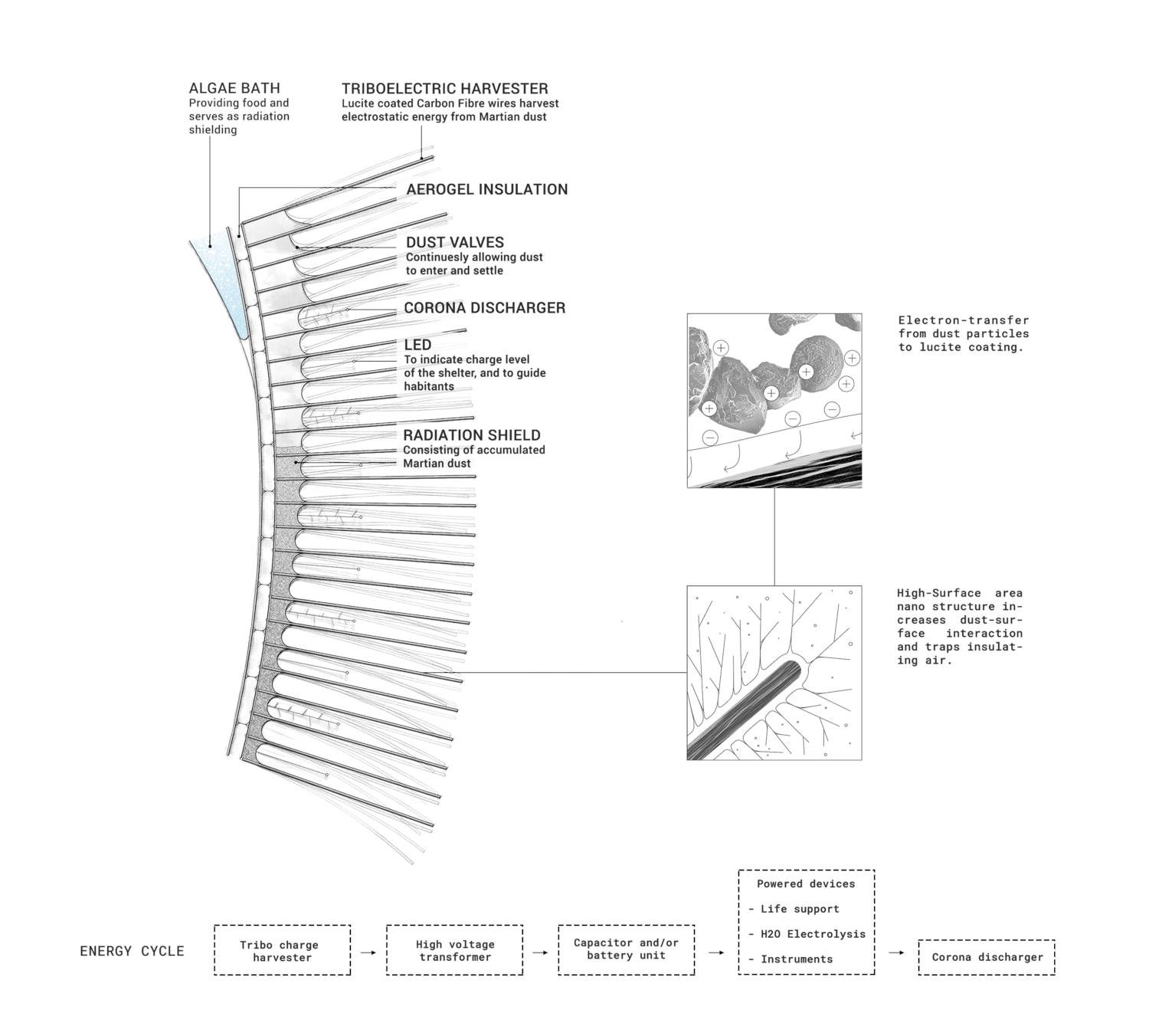 The Dandelion electrostatic harvester works when silicate dust particles collide with acrylic (lucite) coated carbon fibre spikes on its exterior surface, and electrons migrate from the dust to the lucite, giving it a negative charge. From here, the charge moves through the conductive carbon fibre electrodes and a high voltage converter, to capacitors or batteries where it is used to power the shelters. Since Mars has no conductive ground the circuit is completed by bleeding off the charge back to the thin atmosphere using corona dischargers.

As a result of the harsh conditions on Mars, not in spite of them, the Dandelion Shelter is a fully integrated vernacular organism living off of the unique climate in ways that are not possible on earth. 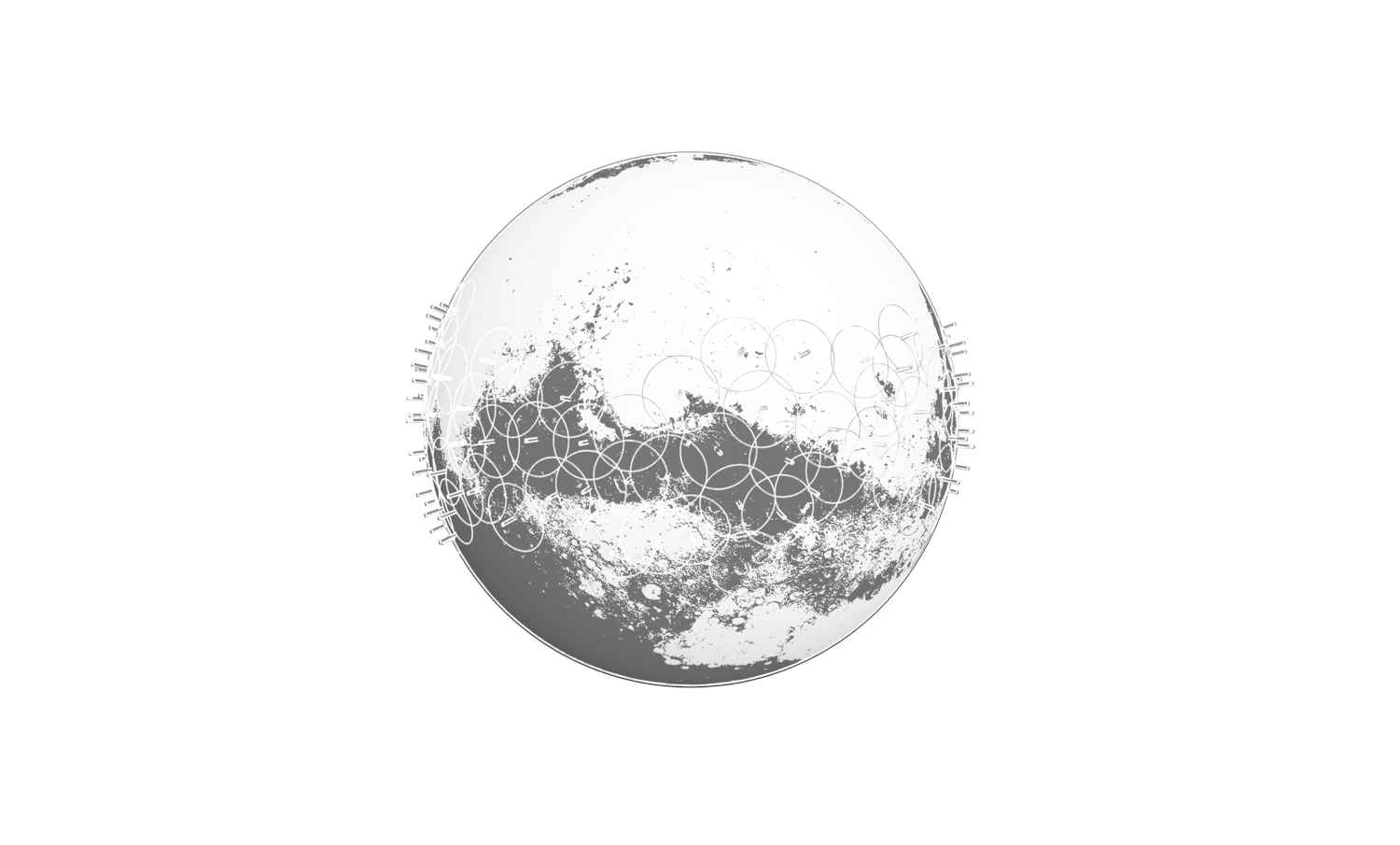 Dandelion Shelter is an exquisitely detailed and refined design which comes to life through beautiful renders of life on Mars. Every detail of this project has been considered and conveyed through a masterclass of how to pitch your vision in architecture