A project investigating how to colonize Mars based on understanding the local conditions and respecting the human need for flourishing, as individuals and as a new civilization. Living in protection from the martian elements has many strange consequences, such as how the absence of seasonal change can cause a numbing of passing time. To combat this and other effects ICE SKY brings inhabitants in touch with martian sunlight and uses an ecological life support system to introduce a new quasi-natural yearly rhythm. ICE SKY is not the first phase of colonization, but a vision of how thriving on Mars as a society might look. 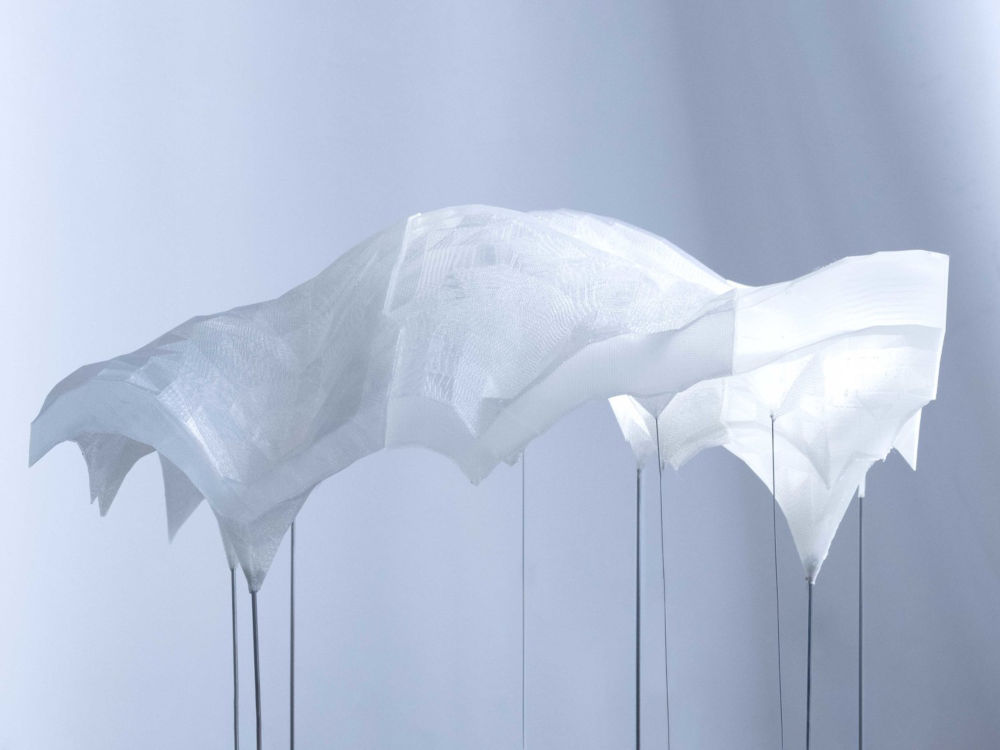 The project looked past individual anti-social habitats and investigated possible city planning principles. The city should be scalable, but still retain high spatial diversity and density - qualities often associated with medieval organic city planning. Hence aiming to create a city that is seemingly unpredictable on the human scale, whilst being highly rational on a macro scale, as is necessary on Mars. 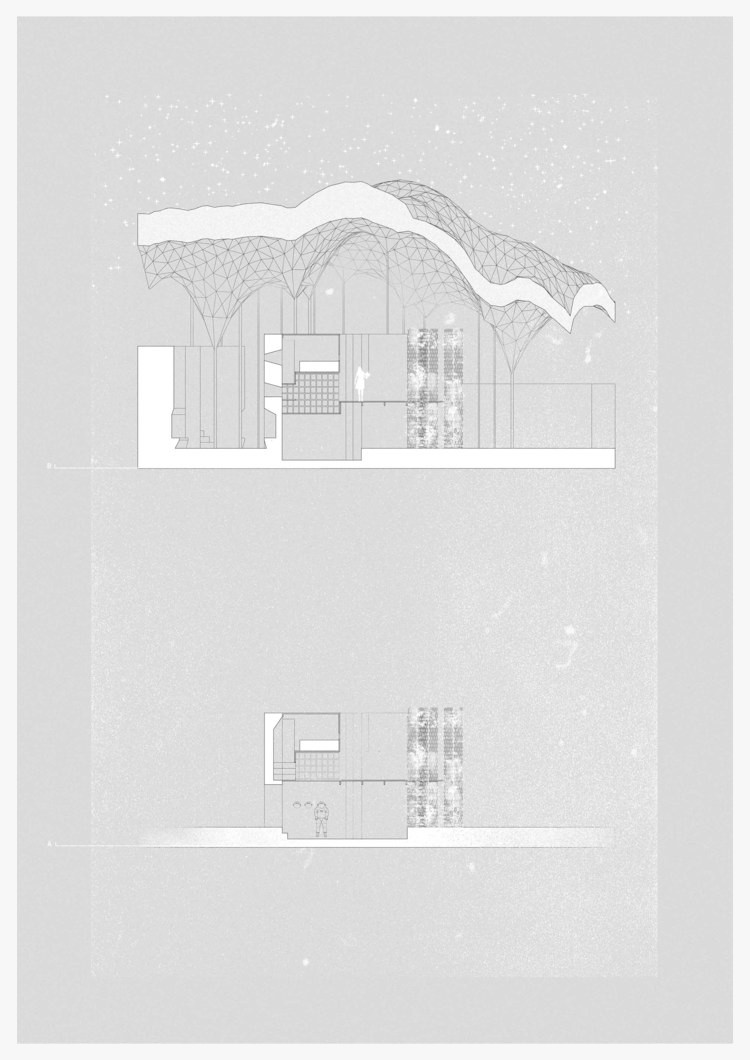 Section through a single dwelling and the Ice Sky itself.

The unique ratio of local minerals in the martian regolith, makes it a great compound for rammed structures, hence the walls of the dwelling consist of rammed regolith. Floors and beams are created with bamboo, which is one of the fastest growing flora. The combination of these two low-tech materials have a very archaic and soothing effect, in contrast to all the necessary life supporting technology. 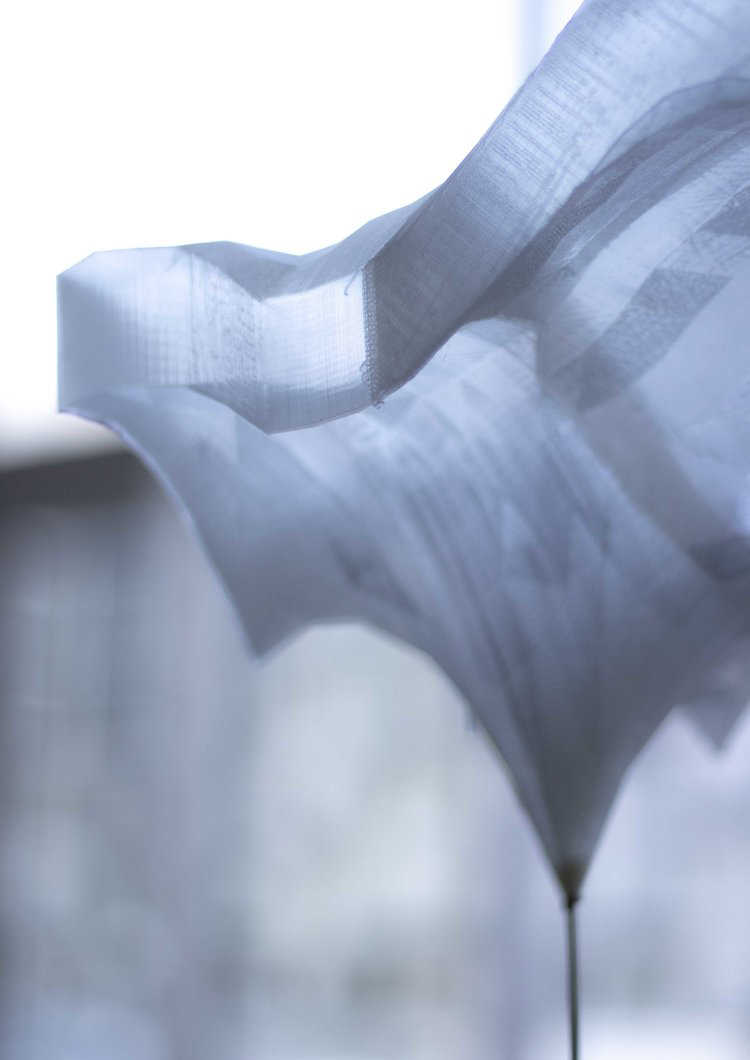 Living on Mars has many apparent challenges, first of which is the non-breathable atmosphere and radiation. An ice envelope solves both issues. Ice is translucent and allows those valuable photons to pass through, but hydrogen is an extremely efficient radiation shield and absorbs most of both cosmic and solar radiation. Ice is also surprisingly abundant on Mars. 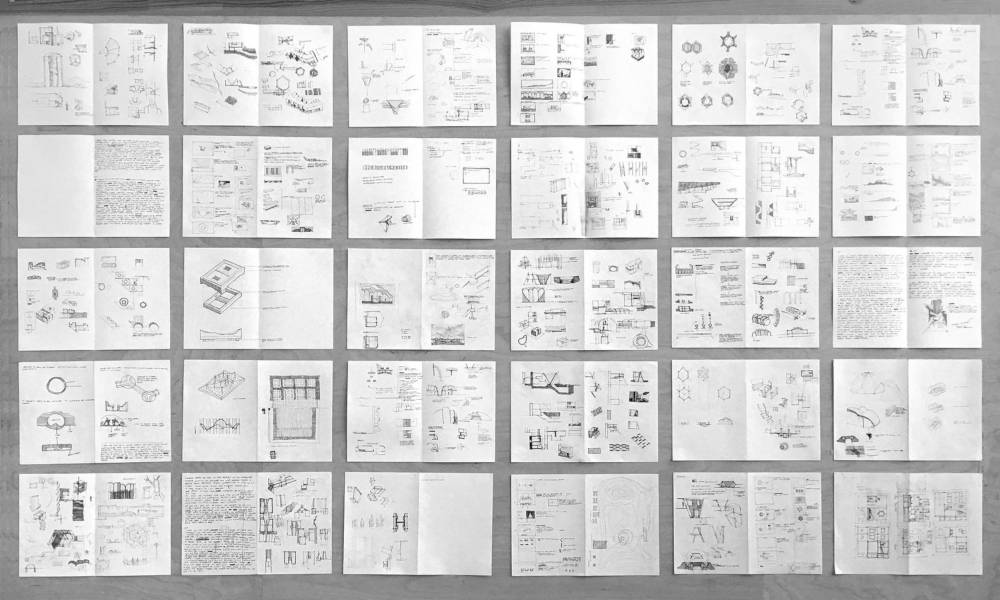 Collage of sketches in folded A4 format - produced throughout the project. 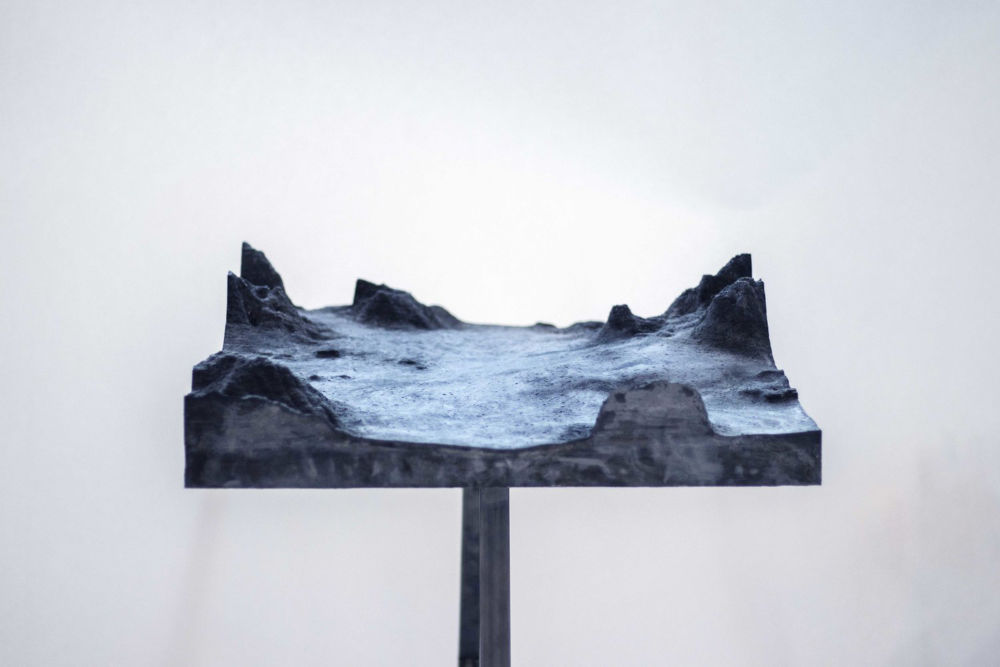 Based on John C. Mankins research of the minimum viable colony size, each hexagon can sustain the lives of 40 inhabitants. This means that the city can expand by 40 people each step - new living carrés can be added as is necessary. On earth the stuff of city life emerges in the streets, therefore one of the key attributes of this system, is to catalyze exciting streets. By seeing the hexagon as a street joint, and rotating this simple geometry, a total of 27 new street types emerge from a single hexagonal plan. 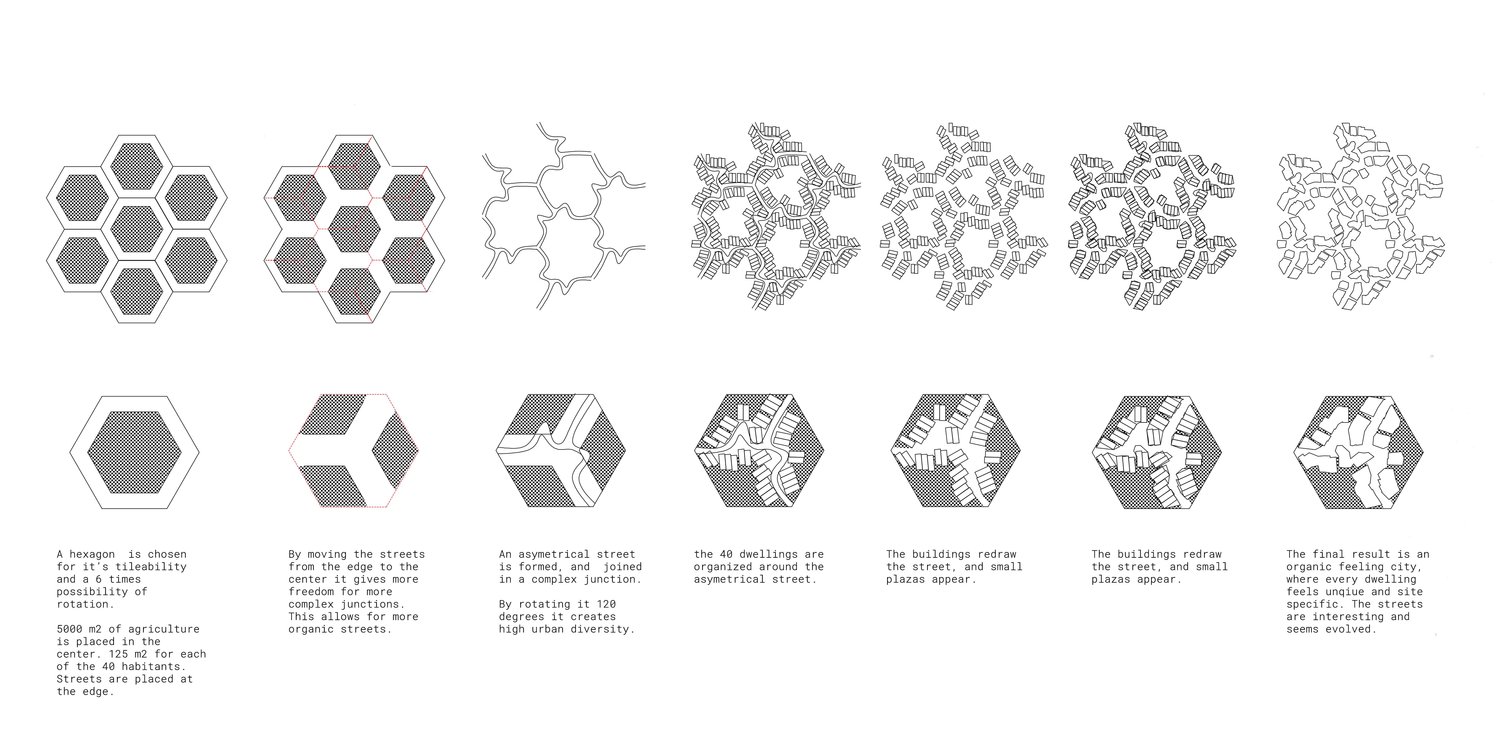 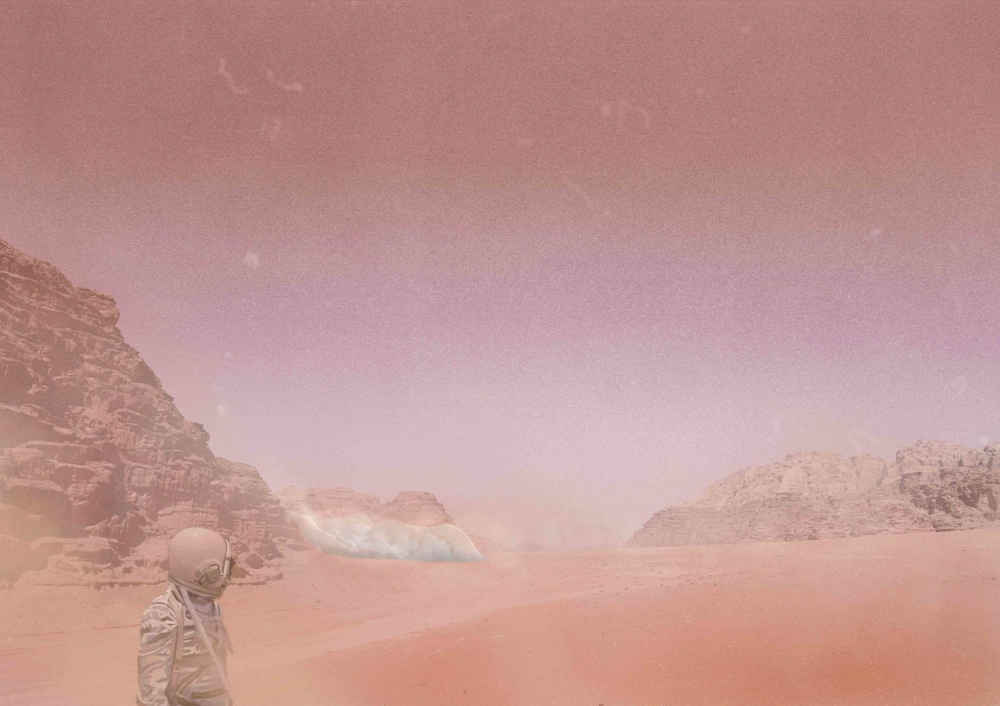 Visualization of the city, based on photographs from our expedition to the Wadi Rum Desert of Jordan.

The center of each carré is filled with lush vegetation. This serves as food production and recreational space, to combat the negative feeling of biophilia - longing for living organisms and uncontrolled wilderness. Thin columns, once used as support for the inflatable membrane, are kept. Within this forest of columns houses and vegetation, life emerges. Under the city are farms. Through the different stages of a plants' lifecycle it responds better to different colors, so a slow transition of hue in tue growth lights happens. Shining through the torus-shaped river, it illuminates the nutritious plankton. This change of color will help give the inhabitants an understanding of seasonal change, since this is lost by living under a sealed roof. 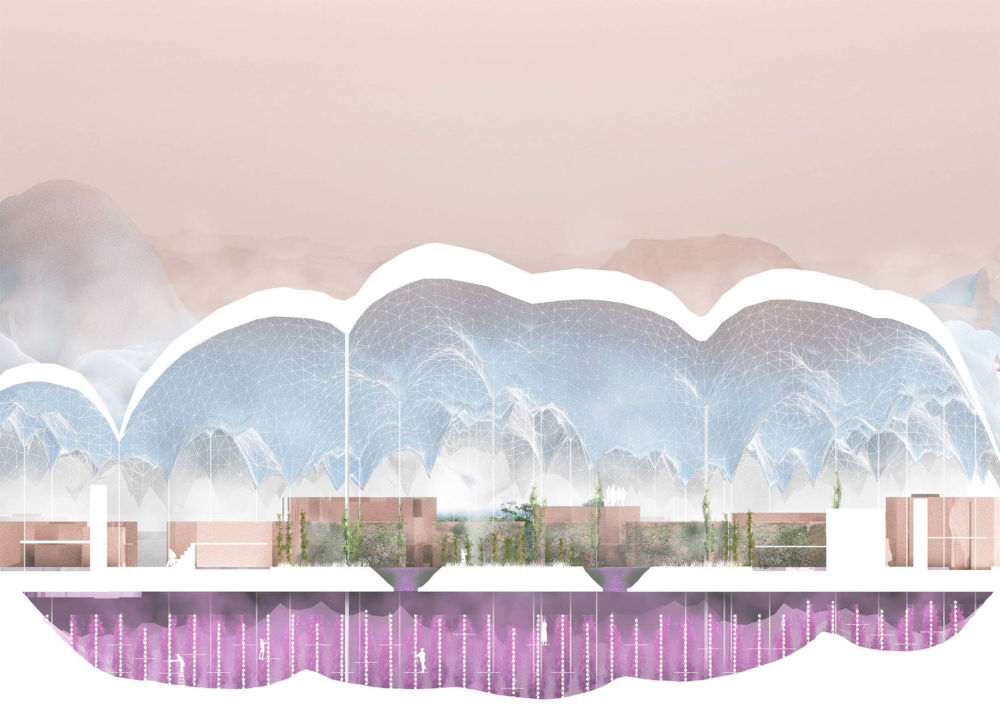 Section through a single carré (hexagon). 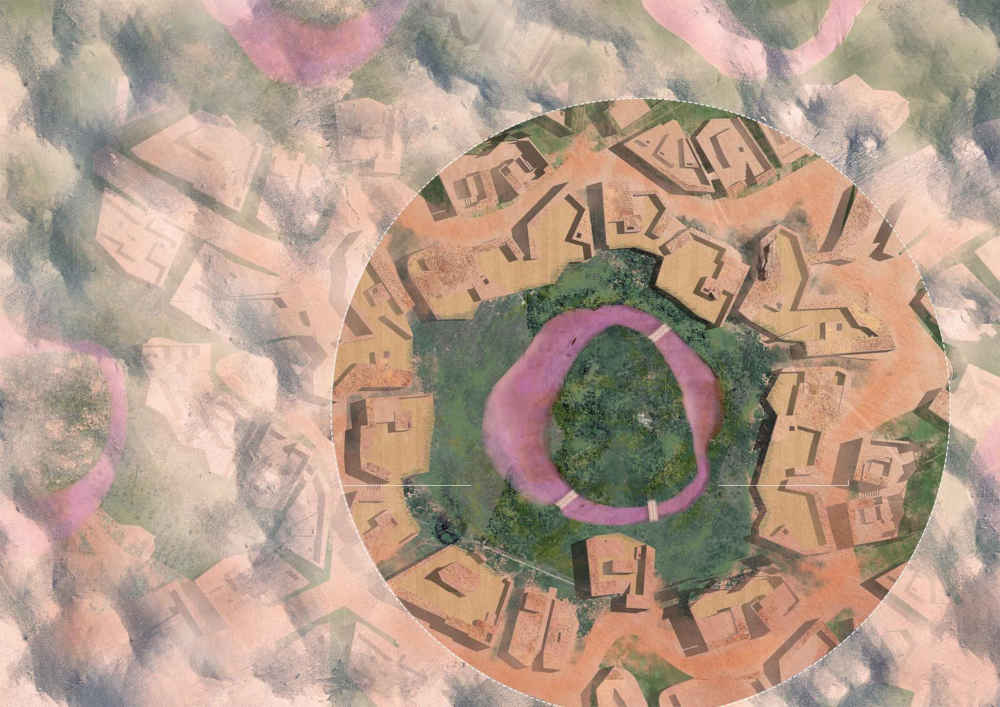 City plan, cutting through the Ice Sky. Showing dwellings and a torus-shaped river in the middle. The river is colored by the underlying growth lights 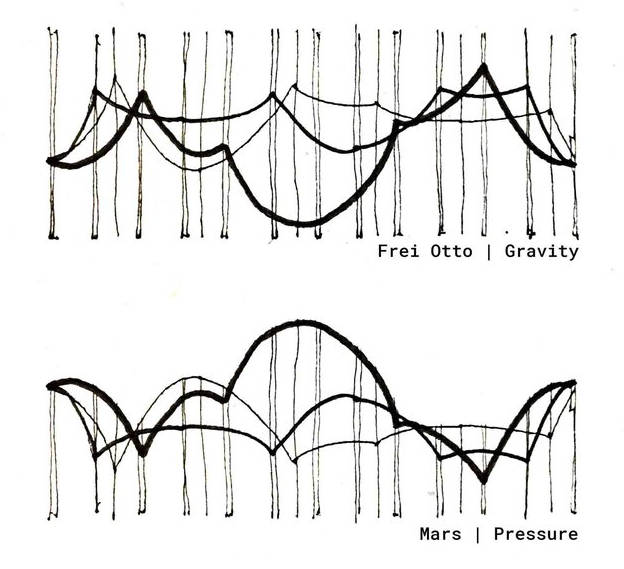 Diagram explaining the morphology of the ICE SKY.